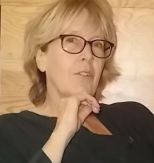 Jane Kirwan’s poetry collections Stealing the Eiffel Tower (1997) and The Man Who Sold Mirrors (2003) and Second Exile (poems and prose written with Ales Macháček) were published by Rockingham Press. She won an Arts Council Writers’ Award in 2002, has been commended and won prizes in several competitions including the National and Hippocrates; has read poetry on Czech television and festivals in the UK and abroad. In May 2013 Hippocrates Press published Born in the NHS, an A-Z of poetry, prose, memoir and facts written with Wendy French, ‘conceived’ when they were talking about the threats to the NHS. Don’t Mention Her is her first novel.