Taking In Water is Pamela Johnson’s third novel. It was written with the support of an Arts Council Writers’ Award.

“I loved the setting, with the prowling sea, the studio, the house where Lydia has made her retreat. Lydia is a woman who has been burned by the intensity of the spotlight and knows that it isn’t safe for her to stay in it. But she is still fully alive as an artist. Most striking is her energy, the way she lives from an inviolable creative core, her survivor’s instincts. Taking In Water is thoughtful, sensuous, so illuminating about what makes an artist and what can destroy her. I was completely caught up in it.”    Helen Dunmore 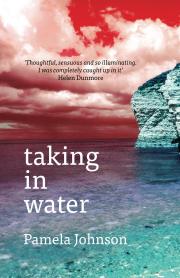 Lydia has found a way to live with her past. Or so she thinks.  An absorbing story of how tragedy continues to shape a life long after the headlines are forgotten

It’s 2002, almost fifty years since the sea smashed through Lydia’s grandmother’s front door, sweeping away her family. Lydia survived the flood of 1953 but was left holding a terrible secret. Events of that night still haunt her.

As a teenager she tried to leave those events behind, escaping to New York with Luc and taking the name, Layla. With Luc she survived a storm of celebrity. Now, she prefers solitude.

In her remote beach-hut studio overlooking the North Sea, Lydia has found a way to live with her past – she makes art from flotsam, photographs clouds and waves. Or so she thinks until certain special objects wash up and she tries to create a work of art that will own up to the secret she’s carried for decades.

Then art historian Martin arrives and wants to research her years in the art world of 1960s New York, and she’s forced to rethink her role in the pioneering performance piece, Taking In Water. As Martin’s questions lead her back to the night of the storm, Lydia is told that her refuge on the cliff is threatened. Coastal surveyors are staking out her home. She must decide – is it more dangerous to reveal her past or to keep on hiding?

You can buy Taking In Water as either a paperback or on Kindle, here