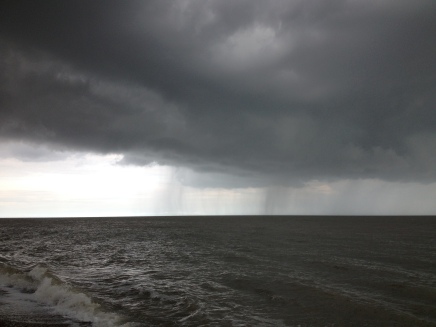 Taking in Water began with weather. I’ve always been fascinated by ‘big nature,’ for years I’ve clipped articles on extreme weather events. Three times I’ve been lucky to escape the wind and the waves. 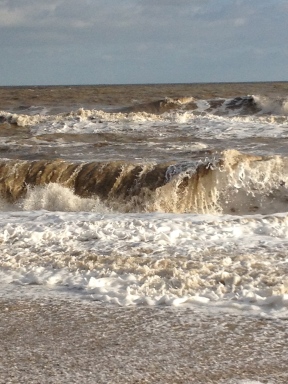 Aged ten, I came within seconds of being swept over a waterfall. We were picnicking by a Pennine stream. The waterfall seemed innocent. It wasn’t a long drop, about five feet, the stream was inches shallow and sluggish. The stepping-stones across to the other bank were tempting. I was mid-way when my father ordered me to turn back.

‘NOW!’ There was urgency in his voice. For once, I did as I was told.

He’d heard the roar of water and knew what it meant. If I’d ignored him I’d have been swept away by a powerful river in spate. Seconds after I reached his side, a torrent of white water swept past. We all stared in silence as it tumbled over the waterfall at great speed, churning and swirling below.

In my twenties a hurricane-force wind felled the tree opposite my flat missing my window by a whisker, falling instead into the flat below and crushing the car of a friend who was visiting.

Then there was that time when my children were small and we were caught in a flash flood, trapped on a train, with a tunnel just ahead filling up with water. You couldn’t see out of the windows for the curtain of rain that kept on falling. We were stuck for ten hours through the night. This was in the days before trains had sockets where you could charge your mobile. Most people’s phones were soon dead. The only information we had came from a passenger with an FM radio who told us that the police were appealing for anyone with boats to come forward.

That day on the waterfall I understood for the first time that the awful disasters you read about in the newspapers could happen to anyone, anytime, without warning. In Taking In Water I wanted to explore what it would have been like if things had been different.

Among my collection of ‘weather’ cuttings was one about the Holbrook Hall Hotel, Scarborough, that fell into the sea as the cliff beneath it collapsed due to unprecedented rain. Researching the Scarborough landslide I came across information about the 1953 storm that devastated the east coast. Why wasn’t this part of the national story like the Blitz or the Battle of Britain? It was the worst peacetime disaster in Britain in the Twentieth Century. One explanation might be that we are too afraid to acknowledge our powerlessness when faced with the force of nature. But there was a practical element: there weren’t any photographs of the event as it happened. The images and newsreels that do exist are of its aftermath.

I soon had the character of Lydia. All I knew was that, as a child, she would have survived the 1953 storm but lost her family. I wanted to explore what happens to someone after such an extreme event and so the story is set in March 2002 as Lydia faces the up coming fiftieth anniversary of the storm. How had that storm shaped her life?

One thought on “Taking In Water – how it began …”