I’ve visited a number of groups to talk about Taking In Water. Most memorable was a visit to the Luton Women’s Book Discussion Group. I was curious to know how they’d kept going for over thirty years, so asked a few questions – fiction, feminism and food are at the heart of it … 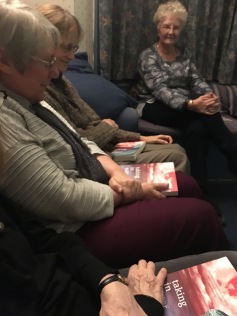 PJ: How did it all begin?

The Group: We grew out of one of a number of Women’s Groups which met in Luton during the early 1980s. One initiative in 1985 was to create special interest groups alongside the smaller Consciousness Raising groups. Book Group was one of these. We did arise from the ideology of the Women’s Movement, and a belief and interest in the principles of feminism have continued to remain fundamental to our approach. We’ve met eleven times each year, starting in December 1985. The pattern of a monthly meeting on a Thursday evening with a break in August, has continued since.

The Group: Five women who attended the early meetings continue today alongside other longstanding and newer members. Sometimes the group can barely fit into the room and sometimes it’s tiny. By and large it seems to self-regulate and usually we have a core group of about twelve. 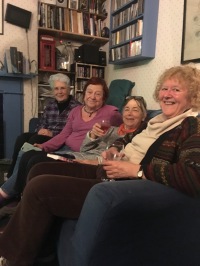 PJ: You only read books by women – no exceptions?

The Group: We’ve always met as a group of women to discuss books written by women. This doesn’t mean, as some critics have suggested over the years, that we reject or ignore literature by men. Most of us read books by both men and women outside the group and books by men may well be cited in discussion. However, we remain a group of female readers who believe that, more than thirty years after our inaugural meeting, we still live in a society where there’s sexism. By maintaining a focus on women’s literature we’re doing something to counter a male-dominated view of the world. In this context, at least, we pay attention the voices of a diverse range of women writers.

PJ: How do you choose your books?

The Group: We choose books two or three times a year. One principle we’ve adhered to is that all books should be readily available in paperback, so not too expensive, although many members order them from the local library. We note down books that interest us and throw them into the pot, sometimes supported by a clipping or a review. A consensus emerges through discussion. We’ve read around 345 books over the years, predominantly novels. But we do incorporate non-fiction, usually biographies and autobiographies, sometimes books about feminist theory. We’ve read The Second Sex by Simone de Beauvoir and The Beauty Myth by Naomi Wolf and, more unusually, The Immortal Life of Henrietta Lacks by Rebecca Kloot, which deals with racial discrimination and scientific developments in the US. We do our best to include a wide range of cultural perspectives. Not all books are popular and some such as Dolly City, an allegory about the creation of Israel, have been regarded as unreadable. The best discussions to seem to be generated by books which divide opinion

PJ: Have you noticed a shift in your interests, over the years?

The Group: It would be interesting to analyse to what extent the books have reflected our own changing life stages. There was a phase in which we reread some of the classics of our childhood such as Little Women and Black Beauty. The latter proved a grave disappointment. We have reappraised classics that we had mostly already read such as To Kill a Mockingbird which did not disappoint and Wuthering Heights which did. Now that many members have retired, we are less concerned by the number of pages and more able to take on a lengthy read. We’ve never been successful in incorporating poetry despite a number of attempts at poetry evenings. This has never generated a coherent discussion though, interestingly, Elizabeth Barrett Browning’s verse novel Aurora Leigh was read and appreciated.

PJ: You have a strong identity with your book lists that are mailed to non-members

The Group: One member produces a distinctively illustrated list of the books we are going to read over (usually) a six-month period. It’s a feature of the group that’s remained consistent over the years and promotes our sense of identity. The list is also distributed to a number of people who could loosely be categorised as ‘Friends of Book Group’. These include members who have moved away and friends of members who cannot attend but remain interested in what we are reading. 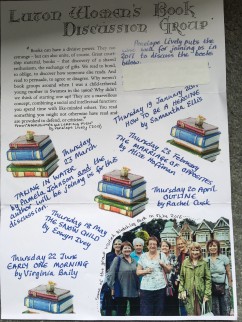 PJ: Tell me about your Christmas meeting – I gather this involves food!

The Group: For our December meetings we, in principle at least, choose books incorporating recipes and cook some of these as the basis of our Christmas feast. However, we’ve unearthed only a few examples of that genre that are worthwhile for both reader and cook. Usually either the recipes take centre stage with little in between or they are included mainly to enhance authenticity and are of the ‘first skin your coyote’ variety. More recently, we have largely ignored the suggested recipes and devised our own in keeping with the book’s culture, which we try to vary so we can ‘eat around the world’.

PJ: You also go on literary outings – how did that start?

The Group: To celebrate milestones in the group’s life we started to go on outings to places where women writers lived and worked or used as the subject of a book. Now we try to go every year, and a convivial lunch is a prominent feature. Places have included: Sissinghurst (Vita Sackville-West); Chawton (Jane Austen’s house/museum); Nuneaton (where George Eliot lived until her early 20s – we had a charming and informative guide for this visit); East Sussex for Charleston (Vanessa Bell plus other members of the Bloomsbury Group), Monk’s House (Virginia Wolf) and Berwick Church (beautiful paintings by Duncan Grant, Vanessa and Quentin Bell); The Manor at Hemingford Grey (renamed Green Knowe by Lucy Boston and housing an amazing collection of patchwork quilts made by Lucy well into her 90s); Buckingham (Candleford) and Juniper Hill (Lark Rise) (Flora Thompson); Bletchley Park (to appreciate the work done by the Bletchley girls during the second world war).

PJ: What’s the secret of your longevity?

The Group: With a handful of exceptions we’ve always met in the same home. Maybe this consistency has been one of the reasons for our longevity. There’s no room for confusion about where to go! Some members have stopped attending for several years but when they return it’s to familiar environment and routine. Inevitably, there are times when the resident member has been unable to attend but everyone knows whereabouts of the glasses, bowls and corkscrew!