We’re delighted to announce the launch of our latest poetry title – Stories & Lies – which showcases a trio of poets as they ask – how can we ever get our full family story when some people stray, some stay put, some go to any lengths to hide their past and others invent?

Three very different poets create the stories that need to be told in order to explore ideas of belonging and leaving, exile and expatriation, family and self. In poems that range from the surreal to the conversational we glimpse relationships across generations, moving from Ireland to the north of England to New England via the Midwest and Eastern Europe. From the most intimate poems to the expansive, these portraits reveal the universal in the personal, the extraordinary in these ‘ordinary’ families.

The book was launched in November at the Poetry Cafe in London’s Covent Garden. 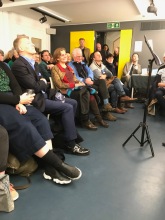 Pamela Johnson, Jennifer Grigg and Jane Kirwan each read and then signed books for a full house. Standing room only! 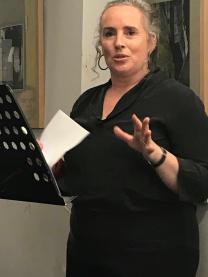 Stories & Lies is available online via Green Bottle Press, click here and scroll till you find the title

I would say that I am something of a veteran when it comes to attending book launches. I have seen the whole gamut: I have snuck into some “media celeb” book launches and seen the likes of Howard Marks, Chris Evans and Plan B. at various populous shing-dings; I’ve briefly clinked glasses with literary luminaries such as Martin Amis and Margaret Atwood in well-thronged, well-upholstered rooms; I’ve been more important at more low-key events when friends and colleagues have given readings and touted their work; and I’ve been largely nerve-wracked when launching some of my own books. I can still remember losing my book launch virginity in 2004, when I’m A Teacher, Get Me Out of Here was first published. That was very exciting because lots of people came along, attracted by the title and the publicity that the book enjoyed: it was serialised in The Observer and I appeared on quite a few TV and radio shows talking about it. I remember drinking too much wine at the launch and not knowing quite what to make of it all. I was even snogged by an admirer!

So, I have seen a few. Nevertheless, the launch of Blue Door Press and two new novels by Pamela Johnson and Jane Kirwan respectively, founders of the press, was very special to me. Unique even. At first, I couldn’t quite put my finger on why. There was a very nice ambiance about the launch, which was in a chic venue in Seven Dials, Covent Garden; it really filled up as the evening wore on and even the heat of the day and all those bodies could not dampen people’s enthusiasm and joy, which was very palpable.

However, I have been to events which have had similarly positive vibes. No, it wasn’t quite that which made it so inimitable. It was only after the speeches that I began to realise what made the moment so singular. Then, it hit me like a novel falling on my head from a high shelf: this was the very first time I had felt that authors were really taking control of their own literary destinies. In all the other launches I’ve been to, there was always the sense that the authors needed to bow down before the publishers; tug their forelocks and doff their caps at the “big boys” such as Penguin/Random House etc, and express extreme gratitude at the smaller outfits. This sense of neediness for a publisher was even the case when I’ve been to events where self-published books have been presented; you always got the sense that actually the authors were hoping that one day a “proper” publisher might take them on.

Not so with Pam and Jane. They have done something different entirely in my view. They’ve set up a writers’ collective which has the rigour and high standards of a “traditional” mainstream publisher, but has the autonomy of a self-publishing outfit. It is worth watching the speeches to see and feel this point conveyed:

I spoke to one of the revellers at the launch who made these points in this video:

Above all, BDP is about publishing high quality, readable fiction. I’ve already written rave reviews of both books on Amazon: my review of PJ’s brilliant Taking in Water is here, and JK’s moving Don’t Mention Her is here. These are both writers who are at once literary and accessible. The two things don’t always go hand-in-hand. In a sense, Pam and Jane’s work are the press’s manifesto; they lay out the standards by which other work must be judged. Standards which many people feel are very high. Here are some fans talking about their work:

As you may have noticed at the end of the first video on this blog, I am delighted to have my new novel Who Do You Love accepted by BDP. Pam has proved a brilliant editor and has given me some work to do on the current manuscript, but all being well I hope to publish the novel in late January next year. More on my novel at another time I hope!